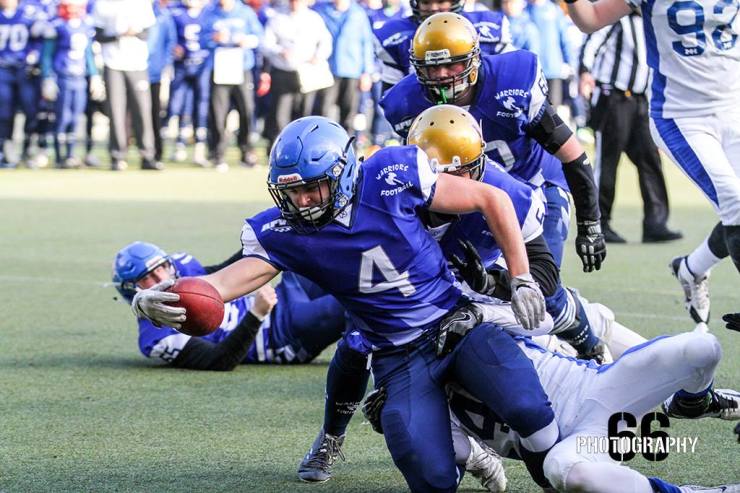 People have been asking me over the years, but more over these last few months, about Mr. John Schanbacher; the star of the Bavarian Warriors and one of the top Running Backs in all of Germany. They wanted to know what makes him so special and what does he possess that many others his age and even older men do not possess. Therefore I decided to do a 1-on-1 Interview with the young man. It still takes me aback at how much he has progressed over the last 3.5 years. Back then, he was just a 13 year old B-Jugend player looking for someone to train him and eager to learn. To be honest, at the time, I didn’t think he would last this long with my training and mentoring. I’ve been told I am very stern when it comes to training and mentoring my athletes, especially in a country like Germany. But I do so in order for my guys to get an idea of how REAL football is like back home in the States. Because if you can commit to the standards I require, then the sky is the limit (not only in football, but also and most importantly, in LIFE). I get the talk that it is a HOBBY for many, but even if everyone is not getting paid, or is on scholarship, or plays for their school, it still is a serious deal and should be taken as such. Mr. Schanbacher carries himself not only with that mindset, but also with his actions. This is a young man, who since the age of 13, has been balancing school, personal life, and football (with school being first). Since day 1, school has been priority for us as that is what his future holds after the game is over. Many of us who have played the game know that a time comes when football ends and real life starts; without an education, we are basically screwed. So, I have been extremely blessed and privileged to have a level-headed young man such as himself to train. The main example I use or rather bring up to others is his tremendous dedication. This is a kid who never makes excuses in terms of keeping up with school and his training. If need be, he hits the gym before school at 6am if he knows he can’t after school (due to practice or having to study for exams). He is a kid who will walk an hour from his home, to the train station, then hop on the train for 40 minutes and then walk another 30 just to get to practice or field sessions. He does all this with not one single complaint. He knows that this is what it takes to be great; not only in football, but in HIS OWN LIFE! Funny thing is that there are many grown men who would never commit to something as this and would rather come up with excuses as to why they cannot make it to training because they don’t have a ride, or it’s too early or too late in the day to make that commitment.

How did you first meet Coach Mele; how old were you?
John: He was playing for the first team of the Allgäu Comets. I was 13 years old at the time.

What made you want to work with him?
John: I wanted to become more athletic and he was kind enough to work with me in order to achieve that.

How has he and RPS helped change your game?
John: I was just a big boy playing some ball. But with his knowledge and my hard work, he developed me in to an athletic running back with the desire to have the perfect form at all times.

What’s the biggest attribute you notice over the last 3.5 years that has gotten better/progressed?
John: I really can’t chose one attribute. He has completely changed me as a player!

You played in the States; where did you play, what position and how was the experience?
John: I played at Buchholz High School in Gainesville, Florida. I switched around from LB to DT and ended up playing Fullback. It was a great experience!

How was the level of play compared to Germany and the player mindset?
John: In Germany, it is mostly all “fun and games”. In the States, it is the real deal. It is extremely professional and for most players, football is their only chance out ofa miserable situation. Therefore their mindset and approach to the game is completely different. It’s just taken more seriously!

Did that experience teach you anything?
John: Yes, definitely! I have always been and will be an extremely hardworking person. But seeing the struggle of some of the guys over there and their approach to the game pushes me even harder to put in more work.

Was it difficult making grades and playing football since you are required (in the States) to keep a minimum GPA for eligibility?
John: To be honest, the minimum GPA of 2.5 was a joke. I took all AP Classes and had all A’s beside in English; which was a “B”.

What goals do you have for your football career: short term and long term?
John: Well first, making the National Team. Long term, being payed one day to play. It isn’t all about the money, but rather more for having a professional and rewarding relationship with a program that truly wants me to play for them.

What drives you?
John: Achieving the goals I have set for myself and my desire to not be average.

How has Coach Mele impacted your life other than as a coach?
John: He is my “brother-from-another”. He is not only immensely valuable for me on the field, but also off of it. I know he would help me out with anything if I need his help or someone to talk to. He also checks on my academics and makes sure I stay at a top academic level.

If you could advise other guys your age that play the sport and want to either play in the States or achieve a great career in Europe, what would it be?
John: Don’t be average like every body else (Do work that sets you apart from everyone else). Create something that you can be proud about at the end of your life; something special people will remember you for ever. Personally, I want to be remembered for my work ethic and consistent grind to achieving any goal I set for myself (for whatever it takes). Honestly, most people are just mentally to weak. No pun intended. But, they will tell you all the goals they have set for themselves, but most don’t set their priorities in a manner in which gives them an opportunity to accomplish their goals. A lot of guys would rather prefer to party and go out drinking than waking up early and training.

To whom much is given, much is received!! 👑🔥
Paljon kiitoksia! Humbled and excited to be the new Head Coach of Team Finland. Stay tuned for this year’s European Championships! 🇫🇮🏈🦁
“At some point, the family you create is more important than the one you were born into” 🎯🏈
A wise man once said, “It’s like the Dallas Cowboys, you either love them or hate them” ✌🏽😈
Nur die Harten kommen in den Garten! 🏔
Fantasy to Reality!! ⚡️🙌🏽